Trisha over at Crunchy Catholic Momma has a Thursday Stash Bash. So I decided to use this as an opportunity to jump start some of the hundreds of projects I have accumulated over the past 10 years or so. Before I went back to work and then graduate school I sewed and embroidered all the time. Gifts for others, stockings for nieces, samplers for all the kids in our families. I started some quilting and fell in love with flannel rag quilts, making them for my boys and my husband. I even won an honorable mention at the State Fair of Texas for one piece of needlework. But life got in the way and I put everything up for a while. The good thing about accumulating a large stash of projects is that even if I never had another penny to spend on anything else, I would have plenty of needlework projects.

I’ve been so busy that I have a new sewing machine that I have had for over a year that I have not even threaded; my 20+ year old Kenmore having finally bitten the dust. It didn’t help that I hadn’t had it serviced and oiled for years.

I pulled out my Drawn Threads project to work on. Called “The Marriage of Minds.”

This happens to be featured in one of my favorite scenes from “Sense and Sensibility.” Kate Winslet, as Marianne Dashwood, recites Shakespeare’s Sonnet 116:

Let me not to the marriage of true minds
Admit impediments. Love is not love
Which alters when it alteration finds,
Or bends with the remover to remove:
O no! it is an ever-fixed mark
That looks on tempests and is never shaken;
It is the star to every wandering bark,
Whose worth’s unknown, although his height be taken.
Love’s not Time’s fool, though rosy lips and cheeks
Within his bending sickle’s compass come:
Love alters not with his brief hours and weeks,
But bears it out even to the edge of doom.
If this be error and upon me proved,
I never writ, nor no man ever loved

I’m doing this sampler for our 20th wedding anniversary which is a year from this November. I started it a couple of years ago, knowing it would take me a few years because I have so many projects, plus I want to enter it in the State Fair and I can’t do that until the summer before my 20th anniversary at the earliest. So, the first thing I noticed is that the blue and white bargello border I was working on had been worked in one thread but the pattern called for two threads. 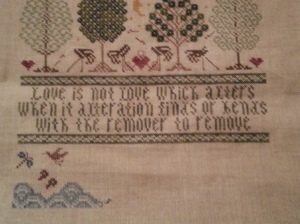 So I had to take out that portion and start over. Long ago I learned that you’re not a good needleworker if you don’t take out as many stitches as you put in.

So, it took about 30 minutes to cut the stitches out and about 1-1/2 hours to restitch that section. Doesn’t it look better with the two threads?

This entry was posted in Uncategorized. Bookmark the permalink.